Almost all wild canines in Australia are genetically more than half dingo, a new study led by UNSW Sydney shows – suggesting that lethal measures to control ‘wild dog’ populations are primarily targeting dingoes. 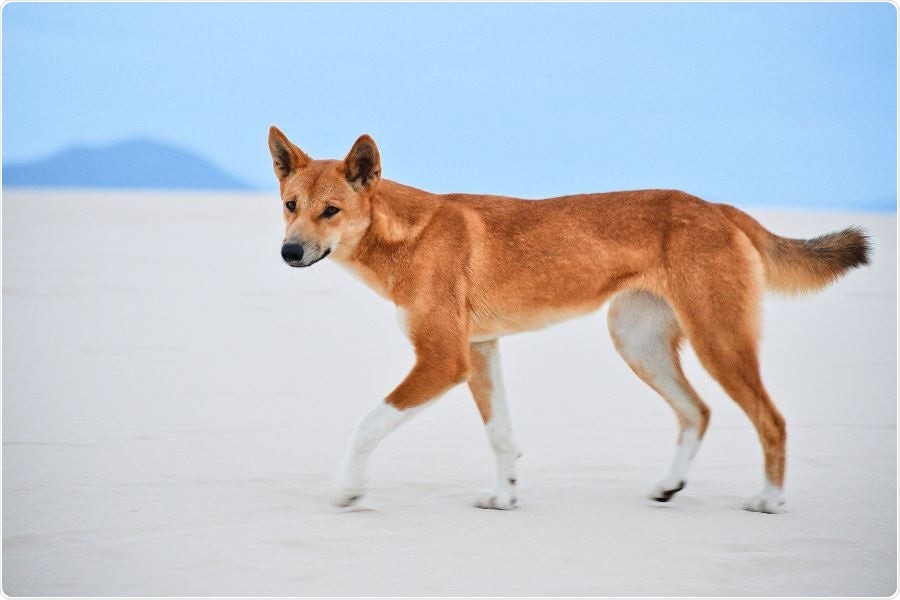 That’s not my name: 99 per cent of wild canines in Australia are pure dingoes or dingo-dominant hybrids, but they’re being labelled as ‘wild dogs’. Image Credit: Chontelle Burns / Nouveau Rise Photography.

The study, published today in Australian Mammalogy, collates the results from over 5000 DNA samples of wild canines across the country, making it the largest and most comprehensive dingo data set to date.

The team found that 99 per cent of wild canines tested were pure dingoes or dingo-dominant hybrids (that is, a hybrid canine with more than 50 per cent dingo genes).

Of the remaining one per cent, roughly half were dog-dominant hybrids and the other half feral dogs.

We don’t have a feral dog problem in Australia. They just aren’t established in the wild. There are rare times when a dog might go bush, but it isn’t contributing significantly to the dingo population.”

The study builds on a 2019 paper by the team that found most wild canines in NSW are pure dingoes or dingo-dominant hybrids. The newer paper looked at DNA samples from past studies across Australia, including more than 600 previously unpublished data samples.

Pure dingoes – dingoes with no detectable dog ancestry – made up 64 per cent of the wild canines tested, while an additional 20 per cent were at least three-quarters dingo.

The findings challenge the view that pure dingoes are virtually extinct in the wild – and call to question the widespread use of the term ‘wild dog’.

“Dingoes are a native Australian animal, and many people don’t like the idea of using lethal control on native animals.

“The term ‘wild dog’ is often used in government legislation when talking about lethal control of dingo populations.”

The terminology used to refer to a species can influence our underlying attitudes about them, especially when it comes to native and culturally significant animals.

This language can contribute to other misunderstandings about dingoes, like being able to judge a dingo’s ancestry by the colour of its coat – which can naturally be sandy, black, white, brindle, tan, patchy, or black and tan.

There is an urgent need to stop using the term ‘wild dog’ and go back to calling them dingoes. Only then can we have an open public discussion about finding a balance between dingo control and dingo conservation in the Australian bush.”

Tracing the cause of hybridisation

While the study found dingo-dog hybridisation isn’t widespread in Australia, it also identified areas across the country with higher traces of dog DNA than the national average.

Most hybridisation is taking place in southeast Australia – and particularly in areas that use long-term lethal control, like aerial baiting. This landscape-wide form of lethal control involves dropping meat baits filled with the pesticide sodium fluoroacetate (commonly known as 1080) into forests via helicopter or airplane.

“The pattern of hybridisation is really stark now that we have the whole country to look at,” says Dr Cairns.

“Dingo populations are more stable and intact in areas that use less lethal control, like western and northern Australia. In fact, 98 per cent of the animals tested here are pure dingoes.

“But areas of the country that used long-term lethal control, like NSW, Victoria and southern Queensland, have higher rates of dog ancestry.”

The researchers suggest that higher human densities (and in turn, higher domestic dog populations) in southeast Australia are likely playing a key part in this hybridisation.

But the contributing role of aerial baiting – which fractures the dingo pack structure and allows dogs to integrate into the breeding packs – is something that can be addressed.

“If we’re going to aerial bait the dingo population, we should be thinking more carefully about where and when we use this lethal control,” she says.

“Avoiding baiting in national parks, and during dingoes’ annual breeding season, will help protect the population from future hybridisation.”

Professor Mike Letnic, senior author of the study and professor of conservation biology, has been researching dingoes and their interaction with the ecosystem for 25 years.

He says they play an important role in maintaining the biodiversity and health of the ecosystem.

“Apex predators’ effects can trickle all the way through ecosystems and even extend to plants and soils.”

Prof. Letnic’s previous research has shown that suppressing dingo populations can lead to a growth in kangaroo numbers, which has repercussions for the rest of the ecosystem.

For example, high kangaroo populations can lead to overgrazing, which in turn damages the soil, changes the face of the landscape and can jeopardise land conservation.

A study published last month found the long-term impacts of these changes are so pronounced they are visible from space.

But despite the valuable role they play in the ecosystem, dingoes are not being conserved across Australia – unlike many other native species.

“Dingoes are a listed threatened species in Victoria, so they’re protected in national parks,” says Dr Cairns. “They’re not protected in NSW and many other states.”

The need for consultation

Dr Cairns, who is also a scientific advisor to the Australian Dingo Foundation, says the timing of this paper is important.

“There is a large amount of funding currently going towards aerial baiting inside national parks,” she says. “This funding is to aid bushfire recovery, but aerial wild dog baiting doesn’t target invasive animals or ‘wild dogs’ – it targets dingoes.

“We need to have a discussion about whether killing a native animal – which has been shown to have benefits for the ecosystem – is the best way to go about ecosystem recovery.”

Dingoes are known to negatively impact farming by preying on livestock, especially sheep.

The researchers say it’s important that these impacts are minimised, but how we manage these issues is deserving of wider consultation – including discussing non-lethal methods to protect livestock.

There needs to be a public consultation about how we balance dingo management and conservation. The first step in having these clear and meaningful conversations is to start calling dingoes what they are. The animals are dingoes or predominantly dingo, and there are virtually no feral dogs, so it makes no sense to use the term ‘wild dog’. It’s time to call a spade a spade and a dingo a dingo.”

Weekend Curfew to be Imposed in Dehradun Municipal Corporation From April 18: Uttarakhand Chief...